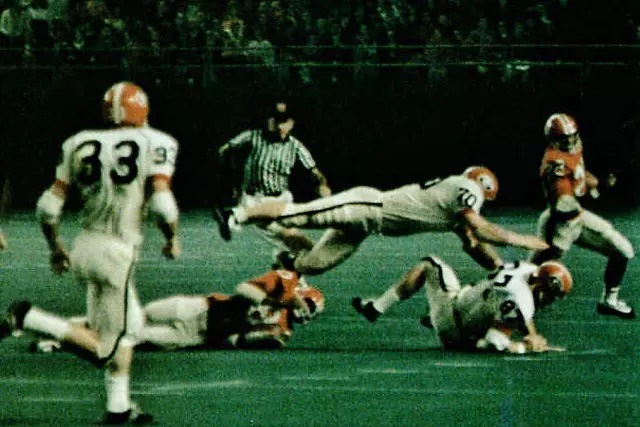 A week before the Georgia game, the Cougars lost at Ole Miss, 14-13. After scoring a late TD, Coach Bill Yeoman decided to go for two and the win but the Coogs were stopped short of the goal line.

The Cougar offense sputtered in Oxford and fumbled several times. Against Georgia, it was worse: UH coughed it up 5 times that day (plus an INT) and were down 14-0 through 3 quarters.

Houston had run wild between the 20s but had been unable to convert. On the first play of the 4th quarter, UH finally got in the end zone. With consensus All-American guard Rich Stotter paving the way, Paul Gipson ripped through the middle for a 25-yard touchdown run. Kenny Hebert added the PAT and UH trailed 14-7. 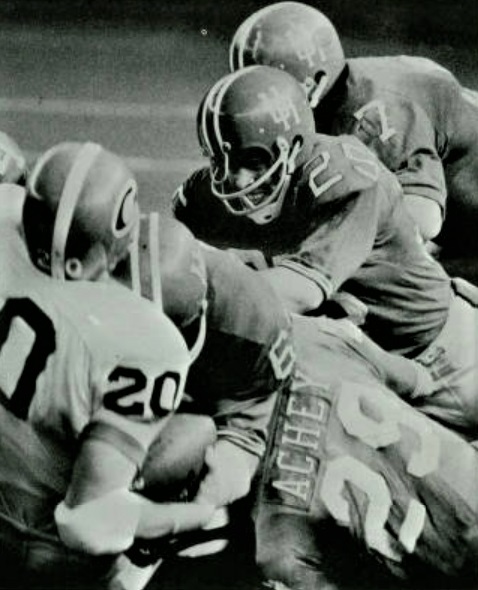 Rich Stotter (#67) played both ways / photo by the Houstonian Yearbook

Gipson set a then-school record of 229 rushing yards and the Cougars ran for a total of 293 yards against Georgia, the nation’s top-ranked defense.

After trading punts, the Cougar offense went to work from their own 30. After a 13-yard run from Gipson on the first play, QB Dick Woodall zipped a throw to Hebert at Georgia’s 25. Hebert caught it and dashed into the end zone for the score. 14-13 Georgia.

Like the previous week, Yeoman decided to go for it. He called a sweep and, behind a critical block from Hebert, Gipson went over the left end for the conversion. The 15-14 lead held up and the Cougars had their second win of the season over a top-5 team.

There are a few interesting postscripts from this game:

Famed writer and humorist Lewis Grizzard began his career as the UGA beat writer for the Athens Daily News. He came to Houston to cover the game for the Daily News while still a student at UGA. He wrote both of the cover articles here:

In the years after, Georgia players have come up with plenty of excuses for the loss.

Bill Stanfill won the Outland Trophy in 1968 for Georgia but after the game called the Astrodome playing surface “more like a pool table than a football field.”

Billy Payne was a receiver for the Bulldogs and went on to to serve as the chairman of Augusta National. Payne said that the reason the Bulldogs got beat was that “we were all just looking around (the Astrodome) and couldn’t believe what technology had done.” To his credit, Payne also acknowledged that Georgia “got beat by a good team and a great running back, Paul Gibson.”

Years later, a UGA player said of the game: “none of us had ever experienced something like that before—playing football indoors on artificial turf. Some players were ripping up the turf and putting it inside their helmet to take home for a souvenir.”

Legendary UGA radio announcer Larry Munson said that he “will always remember pulling up to that huge Astrodome, and there were shoe salesmen all over the place.” Munson says they were trying to sell shoes to the Georgia players since their normal cleats were not practical for the astroturf.

The game is also notable because it was UGA’s last regular-season game outside the southeast until 2008. With the win, UH jumped back into the AP Poll to #10. It was the third-straight week the Coogs had faced an SEC team, having beaten Mississippi State in Starkville before the loss to Ole Miss.

Basketball Preview Sale: Save 40% On A Membership

Where else can you go for historic content about the Houston Cougars? GoCoogs.com takes pride in writing about UH history – the great teams, players, and coaches. Help support our mission of keeping Cougar history alive – become a GoCoogs member today.