Home
Baseball
What Happened To The Coogs In Tampa? 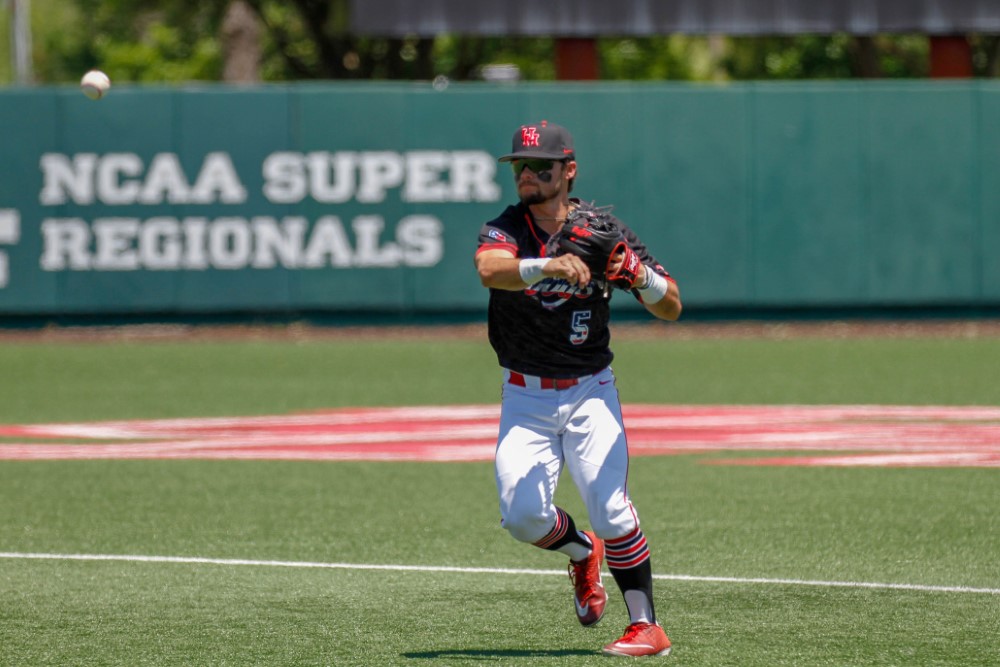 The UH baseball team had a chance to pick up critical conference wins against last-place USF this weekend. Instead, the Cougars left with a brutal series loss that carries potential long-term damage to the season.

Synopsis – USF had just two conference wins (2-10) before beating the Cougars on Friday and Sunday. Once again, the top-of-the-lineup bats disappeared and UH slid back into the 3-runs-or-less funk that has dominated the season.

Which means the Coogs are 7-1 in conference play when they score 4+.

In those 4 games where UH can’t score, the reason is obvious. Triolo, Davis, Bielamowicz, and Padgett have combined to go 5/51 – an .098 BA. Even worse: all 5 of those hits came in the same game. In the last 3 games where UH has been held to 3 or fewer runs, the foursome is 0/37 combined.

Starters Look Ok. Are They?

The starting rotation had an adequate, certainly not spectacular, weekend. Lockhart, Aguilar, and Randel combined to go 16 innings and gave up 6 earned runs. But we’re at a point in the season where that’s really not getting it done. Specifically as it relates to innings pitched.

Ideally, you’d like to get 18+ innings out of your weekend starters with the bare minimum being 16 IP. In 6 weeks of AAC play, UH’s starters have yet to go more than 16 combined innings.

Go Further – UH starters have gone over 16 innings in a weekend just twice all year: 16.1 IP vs. Arizona and 17.2 vs. Dallas Baptist. At no point have they combined for 18 IP.

Why does this starting staff struggle to go deep? It’s simple: first-pitch strikes.

First Pitch Strikes: – This weekend was a glaring example of the need to throw first-pitch strikes. Cougar starters threw 29 first pitch strikes against 70 batters faced this weekend – that’s just 41% of the time. That’s not good enough.

You cannot be successful at this level when you throw so many first-pitch balls.

4th In Conference – Tied with UH in the American standings going into the weekend, Cincinnati swept Wichita State at home. The Bearcats now have a two-game lead for 3rd place in the conference with 6 games left for each team. If the Coogs can’t finish 3rd or better, it’s possible that the AAC is a two-bid league this season.

Or Could It Be A 1-Bid League? – UConn is just 7-8 in the conference but are 26 in the RPI with their 26-18 record. Their strategy of playing almost the entire season on the road or at neutral site (32 of 44 games) seems to be paying off. But if they don’t finish above .500 in the conference, there’s zero chance they get in.

RPI Bump and Dump – By midweek, UH had crept up to 38 in the RPI after the SHSU win and Northwestern State’s upset of #3 RPI Arkansas. But the losses in Tampa killed all momentum and the Cougars have now slipped to 48.

UH finds itself in no man’s land – likely not in the tournament and an upcoming schedule that won’t help the Cougars get back in the field.

Lagniappe – UH is 8-6 in one-run games in 2019 but have lost their last two (including Sunday’s walk-off by USF). Five of those one-run wins have come in games that UH scored 3 or less.

Lagniappe 2 – Since Joe Davis homered in back-to-back innings on April 12th, he’s now gone over 10 games without one. After producing 1.33 RBI per game to that point, he’s driven in just 5 in the 10 games since.