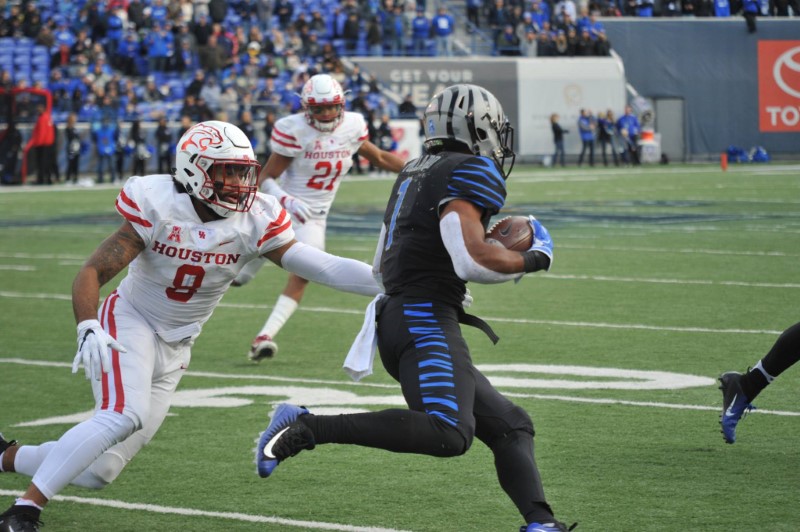 The Coogs Are Due Vs. The Tigers

There are a lot of wrongs that Dana Holgorsen’s program has to right in 2019. Near the top of that list is ending the losing streak to Memphis.

Last night, I was reading about Memphis’ AD leaving and it led me to start thinking about our football series. Coincidentally, six months from today (11/16) the Tigers are at TDECU for the game of the year in the AAC West. Memphis has wrecked this program for 3 years and, if not for their fourth-quarter collapse in 2015, they’d have four-straight wins over the Coogs.

In the last 3 years, Memphis has scored 142 points against UH. And it’s basically all happened in 3 halves:

In 2016, the Memphis onslaught happened in the first half of Tom Herman’s farewell. Remember how Cole Cubelic got in Herman’s face outside the locker room?

Memphis came out and scored 6 times (4 TDs, 2 field goals) in the first half. The Coogs managed to stay in the game and, in fact, led twice in the 4th quarter. But Memphis scored with 19 seconds left to win the game.

The next morning, Herman was hired at UT. And the farcical process to hire Major began.

In 2017, the Cougars were up 17-0 on the Tigers at the break. Memphis was totally inept during the first half of that Thursday night ESPN game – 6 punts, a fumble, an INT, and a missed FG right before the half.

But the second half …. oof. UM scored TDs on six-straight drives.

Worse, Memphis’ 42 second-half points happened on just 33 plays. It took just 8:45 of game time to score 42 points as UH fans received our second-straight taste of the D’Onofrio defense. Who can forget Tulsa scoring 38 in the second half the week before?

That was 11-straight second-half TD drives on D’Onofrio’s defense – six TDs by a Memphis team that was hapless in the first half. Add in Tulsa’s FG to start the half and D’Onofrio gave up 80 points in those two second-halves.

Late in the game, UH tried a fake punt but, as often happened on Major’s special teams, we botched it.

While waiting for the elevator outside the coaches’ box after the game, a Memphis assistant screamed, “thank you for punting the damn ball on fourth down.”

Last year, UH led Memphis at the half once again. The Cougar offense kept punching but without D’Eriq King (and in Clayton Tune’s first start), they couldn’t overcome D’Onofrio’s run-defense. The Tigers scored on 5 of 6 second-half drives before running out the clock.

In 2017, Riley Ferguson threw for 471 yards in their comeback win. In 2018, four rushers combined for 417 yards and 6 TDs. They’ve beaten us through the air and on the ground. D’Onofrio’s defense gave up 77 second-half points in two games to Memphis.

Two days after the second Memphis disaster, GoCoogs broke the news that he’d been let go:

In 2019, it’s time to start correcting the situation. Memphis returns none of the running backs that scored against us last year and QB Brady White doesn’t scare you. Joe Cauthen and Doug Belk have to shut this Tiger offense down just enough to let King, Carr, and the boys run by em.

Correction: Memphis returns running back Patrick Taylor. Taylor ran for 128 yards and 2 TDs vs. UH in 2018.

All Coogs. All The Time.

the #1 site for Cougar football, basketball, and baseball coverage.

going beyond the game recap with insightful analysis.

something for everyone interested in our Dear Old Varsity.