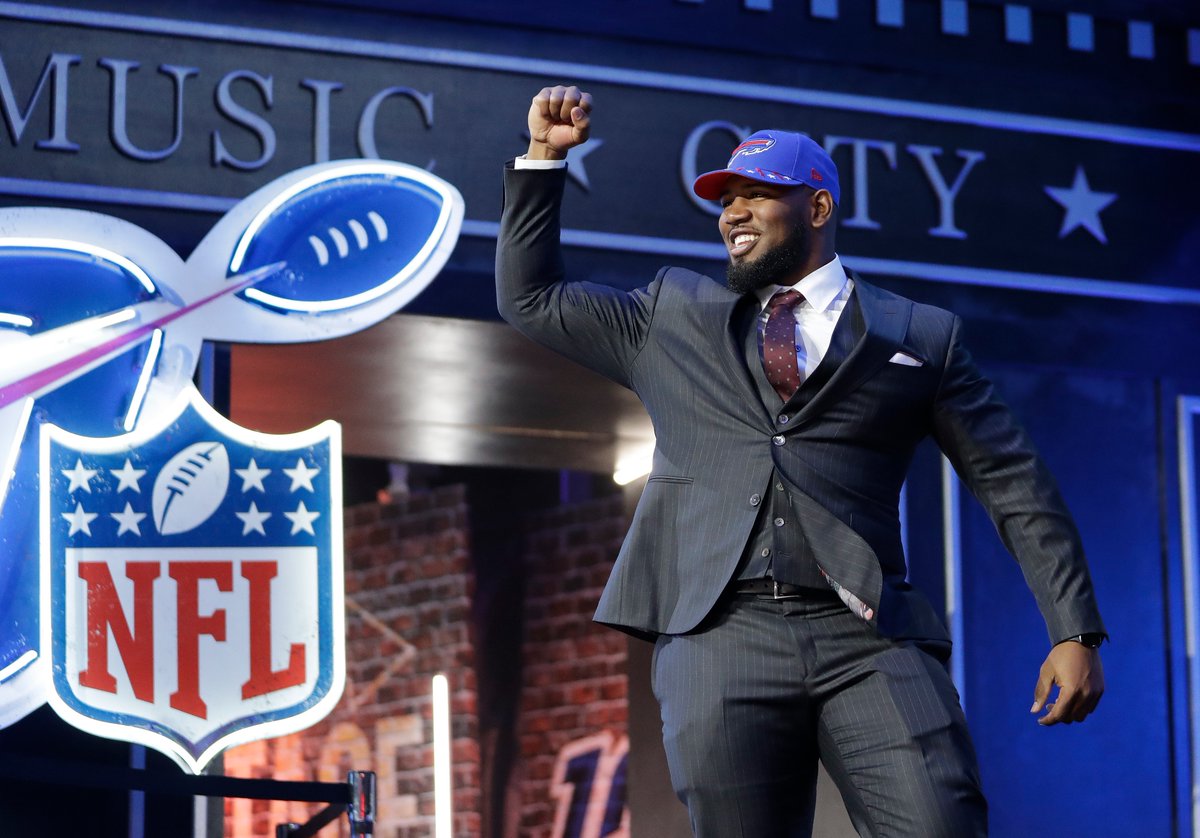 After several questionable choices in the first 8 picks (TE? A Duke QB?), Ed Oliver “fell” to Buffalo at #9. It’s an ideal spot for him – their versatile, one-gap attacking base is perfect for a slightly-undersized DL like Ed.

Ed Oliver is a monster. I am so happy.

Thanks Jon Gruden and the Giants for your dysfunctional behavior.

Immediately, Oliver embraced Bills Mafia, Buffalo’s passionate online group of fans. You saw it during numerous interviews after his selection – leading many Bills fans even happier than they were when the pick was made.

Moments after he was picked by #Bills in first round, I had a chance to talk 1 on 1 with Ed Oliver. Here is part of the interview (Spoiler: He loves #BillsMafia) pic.twitter.com/6DRei9uYOd

Oliver’s outgoing personality was going to be a hit anywhere he landed. But even SportsCenter anchor Kevin Connors got on-board as well:

I have a new favorite player.
And his name is Ed.#BillsMafia @buffalobills https://t.co/6kO0XpjzNZ

Going to the AFC East means facing Tom Brady twice a year. Ed is the exact type of player that can give him and the Pats problems: interior line pressure and a run-stopper.

Oliver will take over for Buffalo’s iron man, three-technique lineman Kyle Williams. Williams started 15 or more games 10 times in his 13-year career and did it at 6’1 1/4″ – smaller than Ed’s pre-draft height was measured at 6’1 7/8″ (considered his main drawback). Oliver will slide into the three-technique spot from day one.

And the Bills just got my favorite player in this draft class. Make him a 3-tech and get the hell out of the way, Bills. You just drafted John Randle.

Congrats, Ed Oliver. The first Cougar drafted in the top 10 in 27 years.

Early Schedule Has Some Interest Quirks

With Thursday’s news of the OU game being pushed back to Sunday, September 1, UH now has the weirdest opening schedule in memory.

The first 1/3 of the season will be condensed into an 18-day stretch, from 9/1 to 9/19. UH will play 4 games while schools like Baylor, Iowa State, and TCU will have only played two.

UH’s opening four games are on four different days of the week:

What it means: It’s a tough way to start for a new coaching staff. Instead of seven-day turnarounds, your first 4 weeks are all 6 days. That matters.

With so few days off and two games against P5 teams in 18 days, there’s a good chance the team limps into the Tulane game banged up. I’ve thought it was a trap game since the schedule was announced – now, even more so.

This schedule means that the Coogs won’t have a full week’s worth of recovery or preparation until week five (@ UNT). Will that alter the last week or 2 of Fall Camp?

Moving on: The Coogs won’t play their first FBS home game until October 12 and will play only 3 games at TDECU before November 16. Because SMU will be on a Thursday, fans will get just two home tailgate days before mid-November.

On a positive note, the OU move to Sunday night on ABC means 3 of Houston’s first four games are on the big stage: Wazzu will be on ESPN or ESPN2 and Tulane is set for ESPN. None of the three games are at home.

Go deeper: The Coogs are scheduled to play in 5 different stadiums in the first 5 weeks of the season. It’s the first time this has happened since 1996 when the Coogs split time between the Astrodome and Robertson Stadium.

UH has played in 5 different stadiums to open the season twice: in 2005 and 2008. Each of those schedules were altered due to September hurricanes.