Which makes it hard to believe that the Owls ended the 3rd quarter with a four-point deficit. With just 6 plays and 1:44 time of possession, Houston’s offense flipped the game entirely. And they did so using just 1 formation in the quarter.

It’s a three-wide set with the outside receivers wide to the numbers and the slot receiver wider than any other offense in football. Those wide splits create space – and lots of it. The running back is set to the power side of the QB and the TE plays off the line – basically a fullback. It’s a base Stephenville/Houston/Baylor/Briles offense that has been effective for years. Here it is when Baylor faced TCU in 2015. 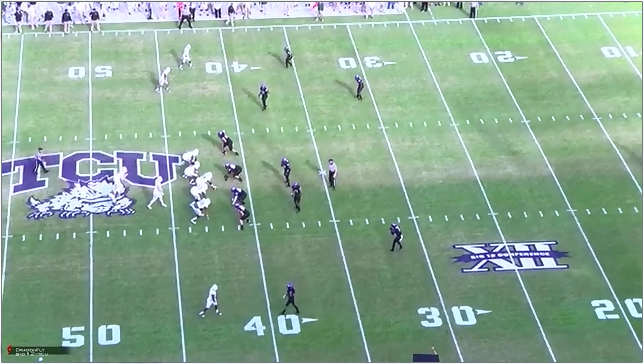 This formation forces defenses to put their DBs on an island and makes it tough for defenses to get safety help against. In the Kendal Briles version, there’s almost always a run-fake coming out of this formation.

Here’s all the ways the Cougars utilized this set in the 3rd quarter. 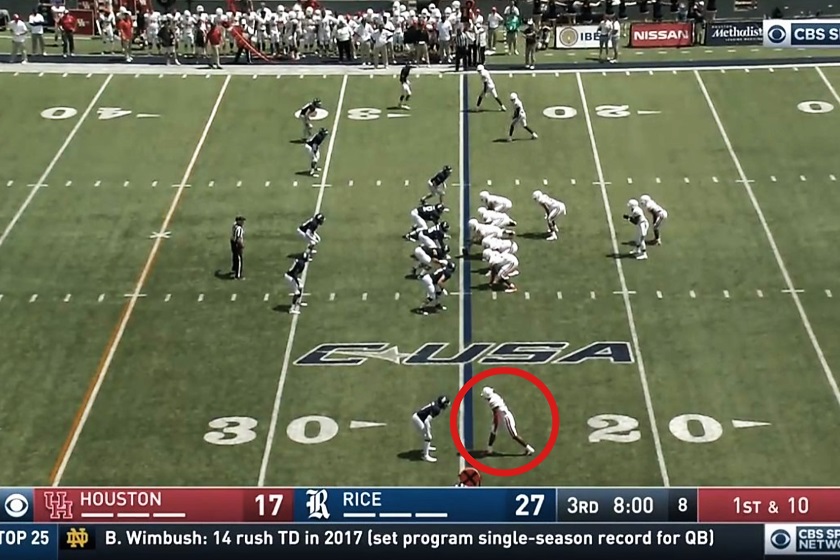 First play of the half – Corbin (circled) on a quick slant

On the 1st play, the Owls loaded the box and the free safety cheated up towards the line. D’Eriq King immediately recognized this, made a good fake to the RB and hit Keith Corbin on a quick slant for 46 yards.

Corbin was split out by himself with a one-on-one match-up and just had to get inside position to win the battle. Corbin caught the ball 15 yards down the field with only 1 defender within 8 yards of him. Leftside cornerback Tyrae Thornton had to come across the field to make the tackle. 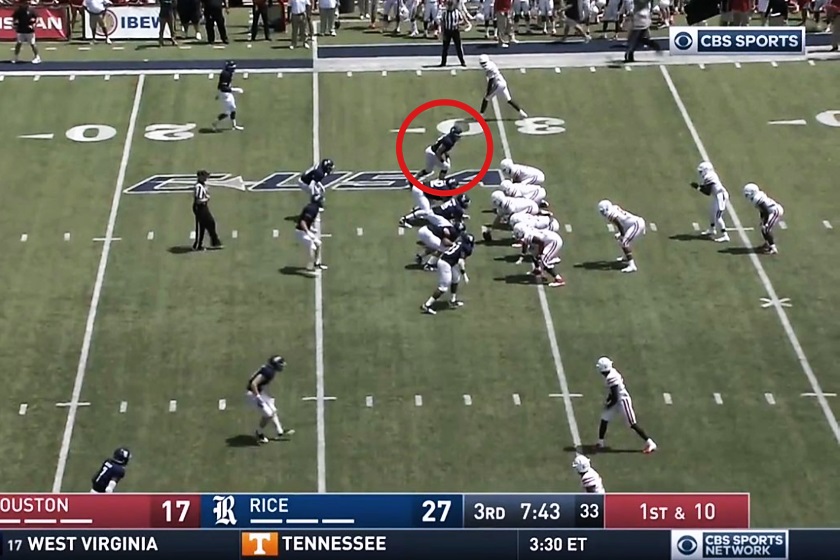 The Coogs rushed to the line in the same formation.

This time, the safety stays back and the left outside linebacker overcommits towards the QB, effectively taking himself out of the play. King hands off to Patrick Carr who goes underneath the OLB right to the space that the he vacated. The result? A 25 yard gain to the Rice 4. 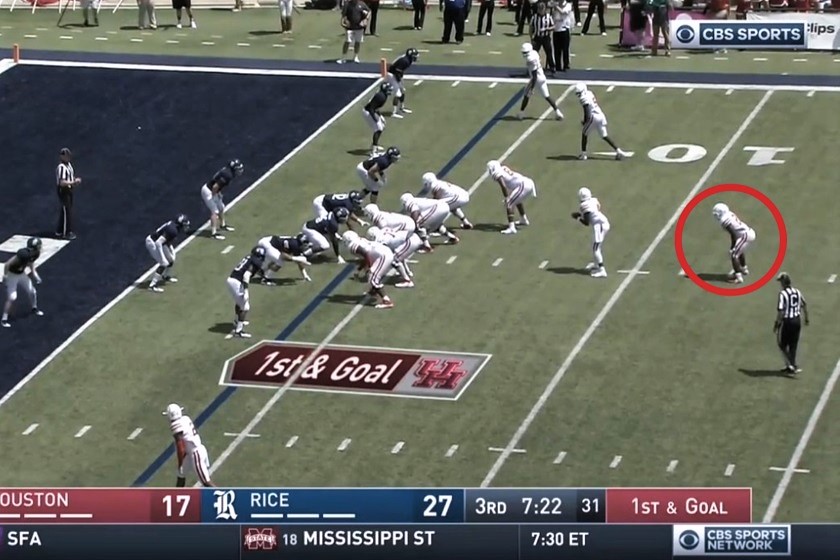 Formation before the audible – RB is 8 yards deep

The Rice defense sets with 8 in the box forcing King to check into a new play. The Coogs go back into the set used in the first two plays of the drive. 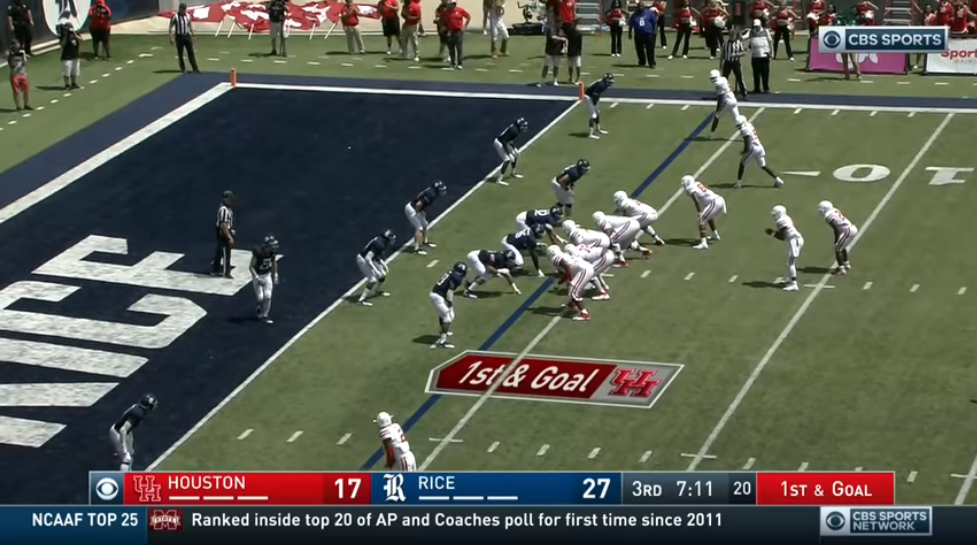 King rolls right to take advantage of one of his two one-on-one match-ups to that side. But the QB sees an opening to the goal line and pierces it, running for the 4 yard TD. 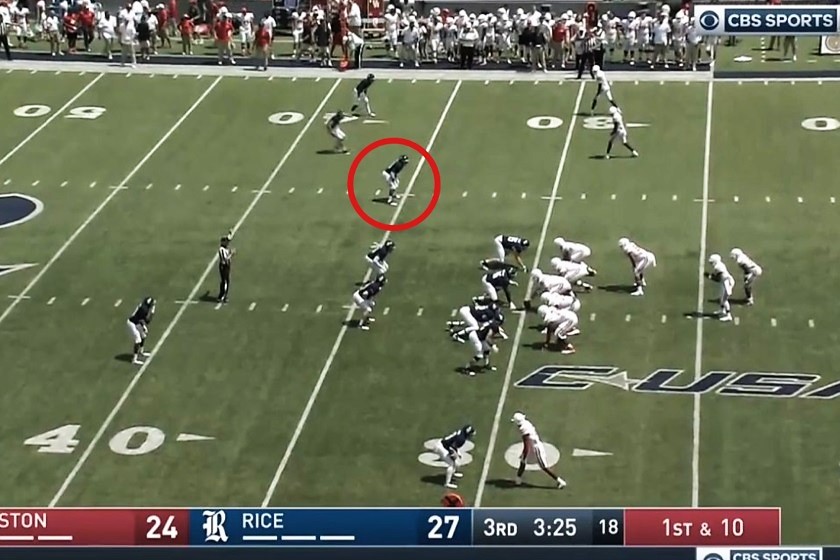 Rice drove down to the 30 but missed a FG. With 3:25 to play in the quarter, UH comes back out on offense in the same formation. King identifies the space and hands off to Patrick Carr, who goes for 6 yards. 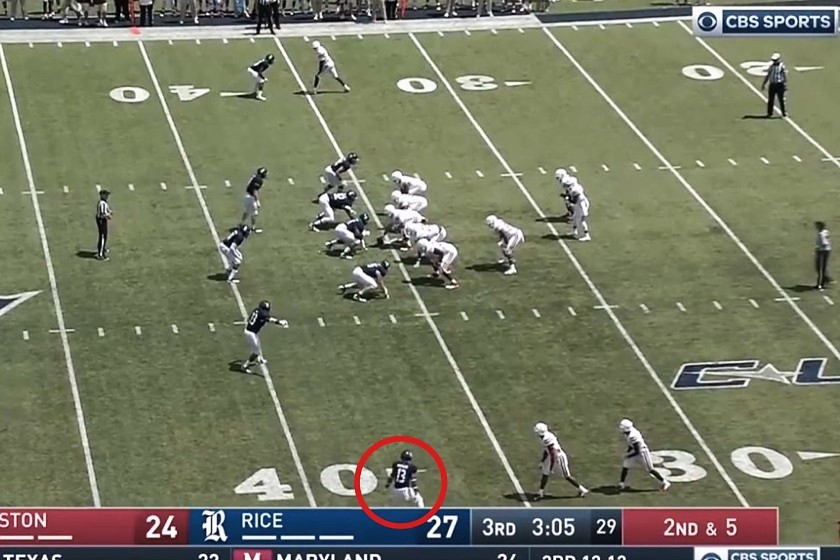 2nd down screen pass to Stevenson

On second down, the Coogs use the same formation but with stacked receivers to the leftside. Corbin is the front man and goes 5 yards downfield to screen the DB. Marquez Stevenson steps up into the space vacated by Corbin and catches a screen pass for 7 yards. 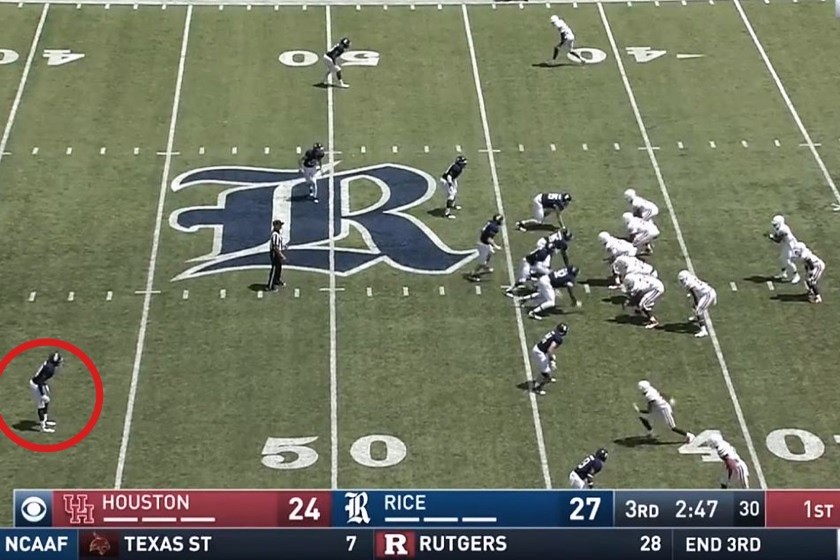 Pitch & catch thanks to the DB allowing lots of open space

From the UH 43, Stevenson sets back up as the inside receiver and is left unattended at the line. Free safety Houston Robert is ‘covering’ him but gives the speedster a 14-yard cushion. Stevenson runs a 12-yard slant and King leads him perfectly across the field. King dropped the dime at the 24 and Stevenson does the rest. Touchdown Cougars.

In the quarter, the Cougars ran 6 plays, covered 145 yards and did it in just 104 seconds. All 6 plays come out of the same formation (with a slight alteration on the only 2nd down of the quarter for UH). Yeah, 5 of 6 plays were run from first down.

UH showed that you can be explosive and even diverse using just one formation. A quick slant, a read option, a rollout (that turns into a QB keeper), a handoff, a screen pass, and a deep slant all out of the same set. On 5 of the 6 plays, there’s at least a run-fake (the screen pass is so fast that a run-fake isn’t necessary). 3 runs, 3 passes – a balanced offense.

And this is just our first taste of the Kendal Briles version of offense.