With less than 4 minutes to play in the first half, UH stopped ECU at their own 18 yard line. It was 4th and 1 and the Pirates would have to punt.

But instead of the Coogs getting the ball, incompetence took over. The officiating crew and the replay official overturned an easy, straight-forward call on the field. With ECU trailing just 14-3 at this point, the replay reversal could have made a big difference (thankfully, it did not).

Nevertheless, I want to go through it with screen shots to show just how bad this American Athletic Conference officiating crew & replay official botched it. Thanks for playing along.

Beginning Of The Drive

Dane Roy punts a ball 49 yards to the 17. He flipped the field for the Cougars. ECU was also hit with a holding call and lost half the distance to the goal. The Pirates begin their drive from just beyond the 8 yard line. 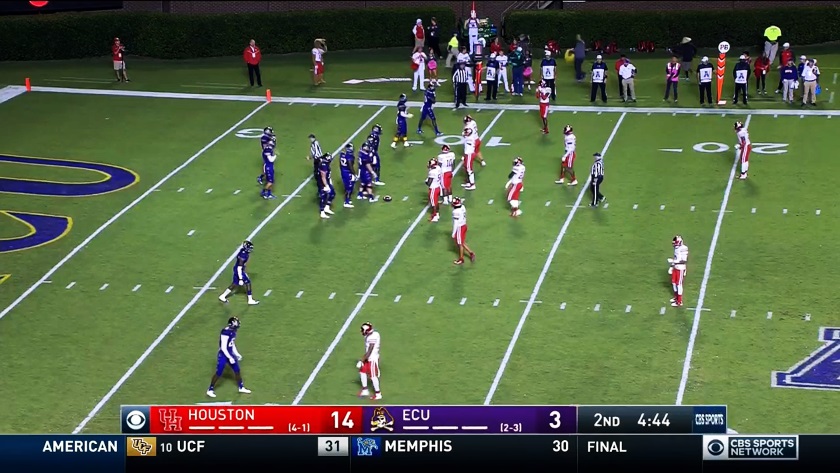 The down-and-distance marker says they need almost the 19 for a first down. 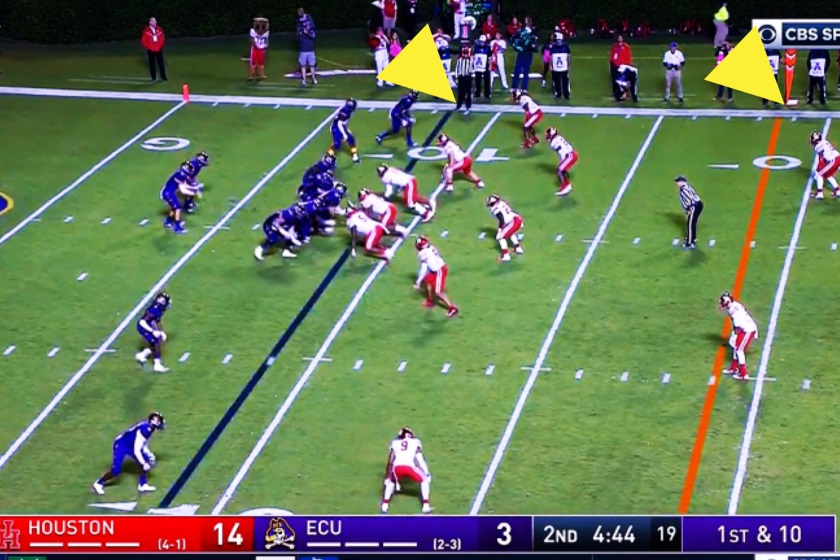 The Pirates need 18.5+ yard line for a first down

ECU runs for 2 yards on 1st down and another yard on 2nd down – out to the 11. On that play, ECU’s left tackle gets a late hit call. Before the signal was made on the field, Major had seen it.

But ECU coach Scottie Montgomery pitched a fit over the PF (the call on the field was correct). ECU called a timeout so Montgomery could continue to gripe to the head linesman and the back judge. He never walked into his own huddle during the TO – even with him team now backed up to the 5 yard line.

(Off subject for a bit: This has no bearing on the play but it’s kinda odd: ECU lines up near the 5.5. You can see the ball well short of the 6 but the CBSSN blue line has it on the 6. Until you look to the far sideline where it is correct – just short of the 5.5. How does that happen to a straight line?) 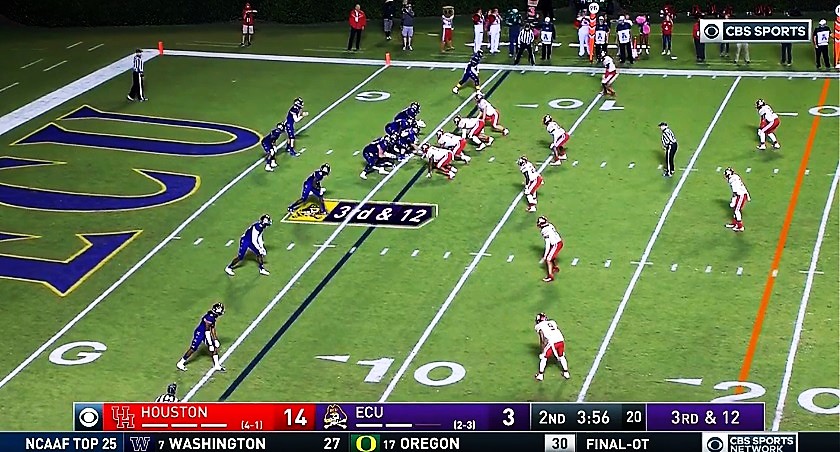 3rd Down From Just Outside The 5 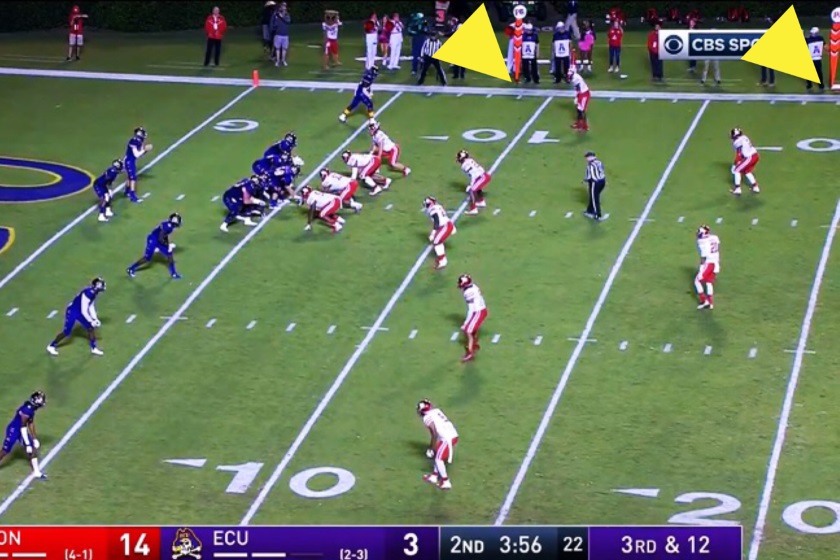 QB Reid Herring throws a screen to the right side to Terrell Green. Green goes down the sideline and is knocked out of bounds short of the 18 yard line. 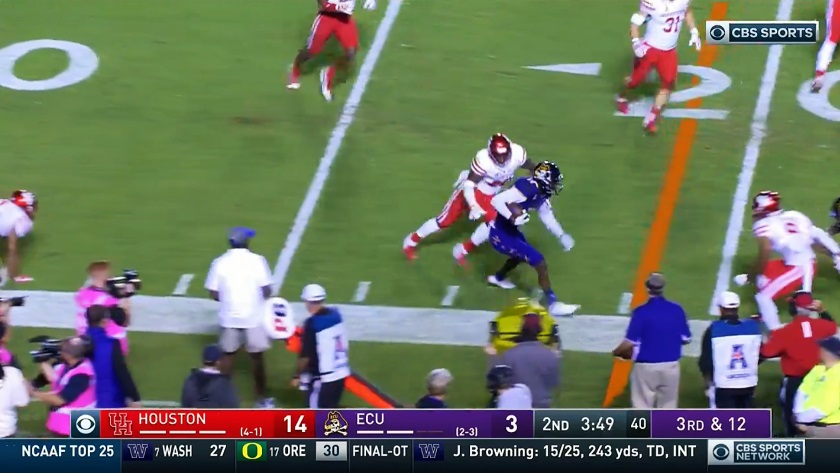 It doesn’t matter where the front foot steps out – the only thing that matters is where the ball was when he went out of bounds. This clearly shows the ball short of the 18.

The CBS broadcast crew butchered the call (“the spot looks good … he got it!” says Dave Ryan). They even put 1st and 10 on the screen. But they are wrong. Even the refs get this right – look where they spot the ball: 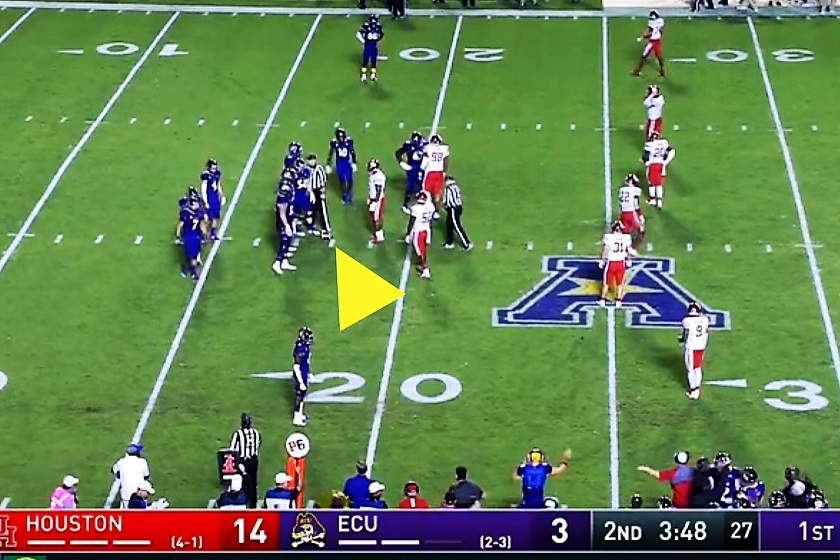 The ref correctly spots the ball short of the 18.

The yard-to-gain marker is almost the 19. The ball is short of the 18. It’s 4th down. You can see the unofficial yard-to-gain marker on the bottom of the screen – it’s a full yard short. For some reason, the chain-gang was told it was a first down – even though no official on the near sideline signaled it. That caused delay and confusion. And gave Montgomery more time to become even more unglued.

Because he wasn’t given the first down, Montgomery had begun to flip out again. Worse than the personal foul a play before. He’s livid. Screaming at the officials.

Eventually, ECU gets their punt team on the field, snaps the ball to punt and …. the whistles blow. Replay has buzzed down for a review of the ball spot.

My DVR shows that 92 seconds went by between the time he stepped out of bounds and the time the call was buzzed down from the replay booth. That is ridiculous. How has this referee allowed 92 seconds to go by between 3rd and 4th down (absent a timeout). And if the replay guy wanted to review it, why’d it take 90+ seconds to indicate it?

Four and a half minutes after Green stepped out of the bounds, the referee takes the headset off to announce that the spot has been overturned. He announces, “the ball will be placed at the 18 and a half yard line where the line to gain was made and its a first down.” 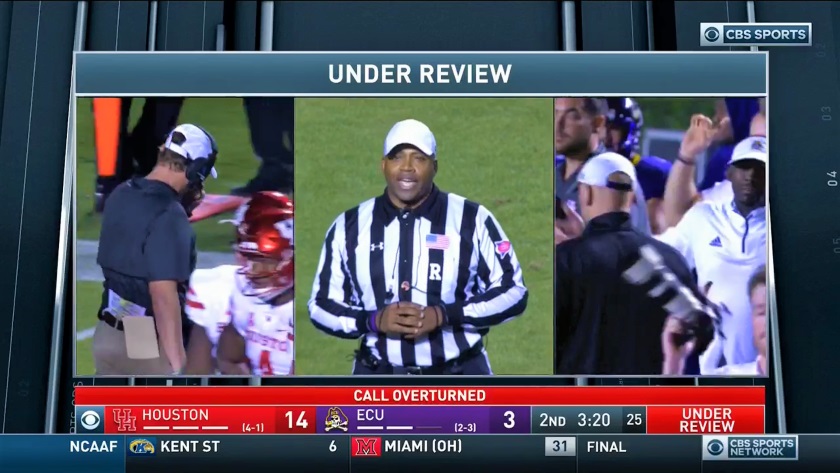 Except the ball never made the 18.5. You and I know this:

The ball is short of the 18 yard line

Even here, where he is further out of bounds, the ball is still not to the 18 yard line: 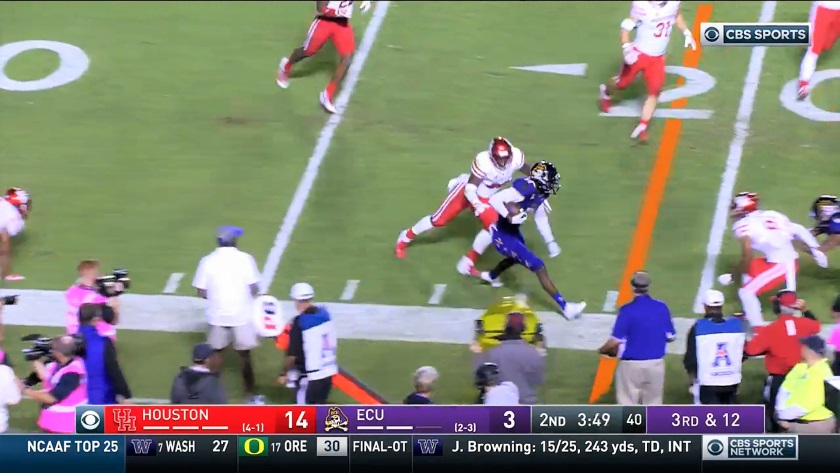 If a guy on his couch can immediately screenshot that he went out of bounds before the 18 yard line, and have it on Twitter before the replay ends, then it’s safe to say that a paid replay official should see the same. Worst case, he sees nothing and the call on the field stands.

But the replay official somehow overruled the call on the field. With no evidence to do so. Green never made the 18.5 but was gifted the first down spot by the upstairs booth.

As noted before, this came at a pretty important point in the game. UH is up 14-3 with 3:48 left in the half. With a 4th down from the 18, ECU would have punted and UH would have had the ball near midfield.

But the Pirates were allowed to continue their drive with a fresh set of downs. Eventually, Herring was intercepted by Emeke Egbule at the 41 and four plays later the Coogs scored.

Gallery of Screenshots From Article 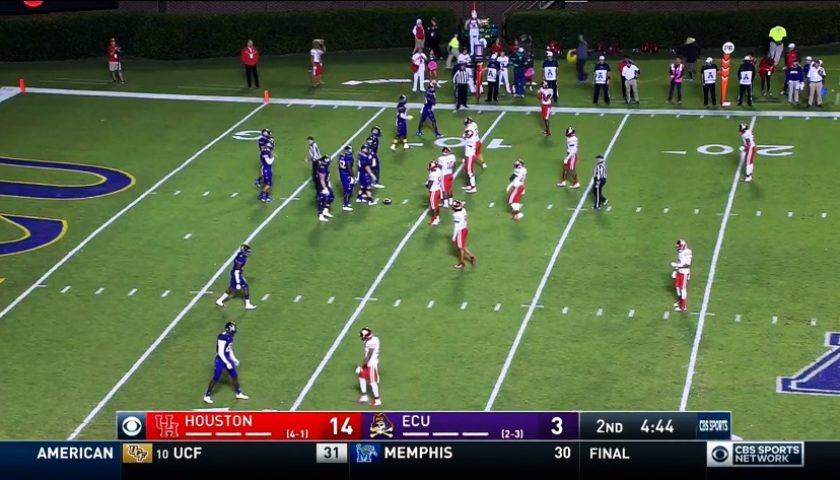 The drive starts just beyond the 8 yard line 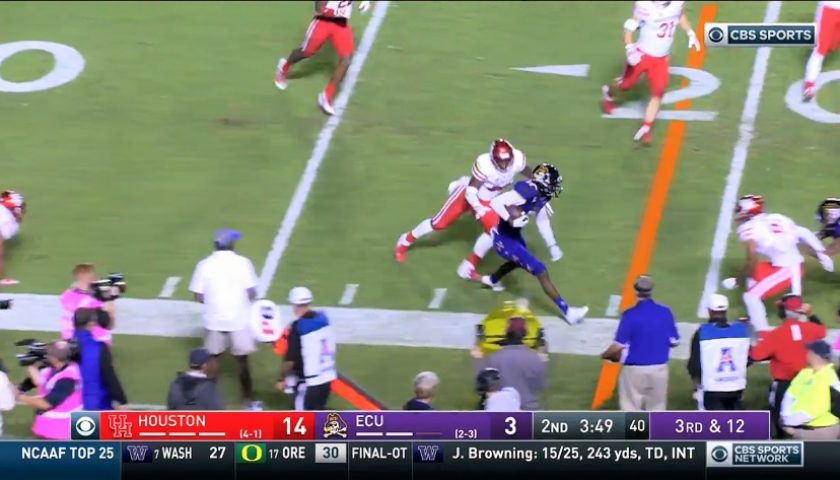 Further out of bounds – not to the 18 yard line 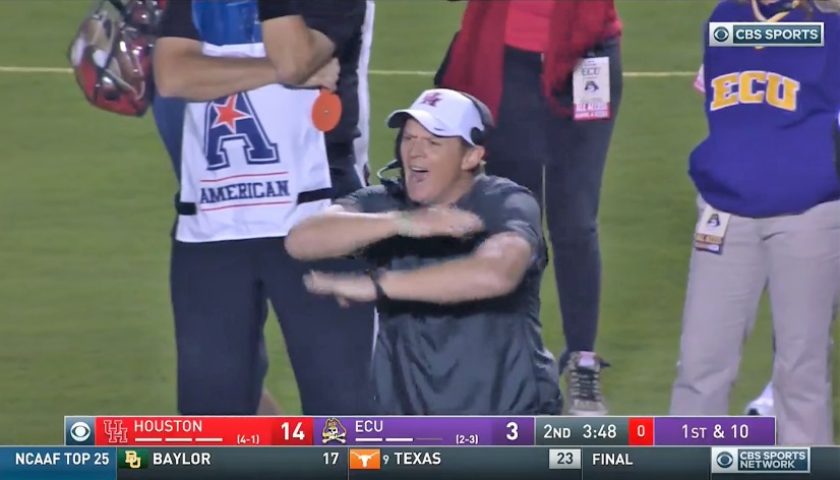 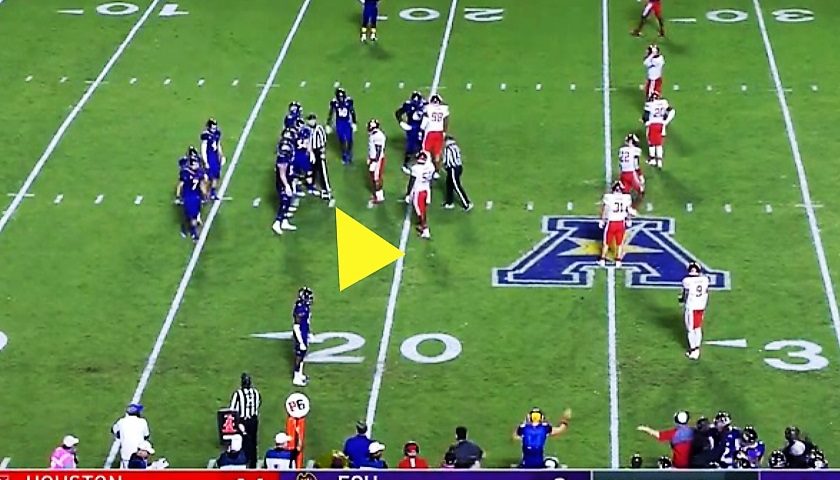 The ref correctly spots the ball short of the 18. 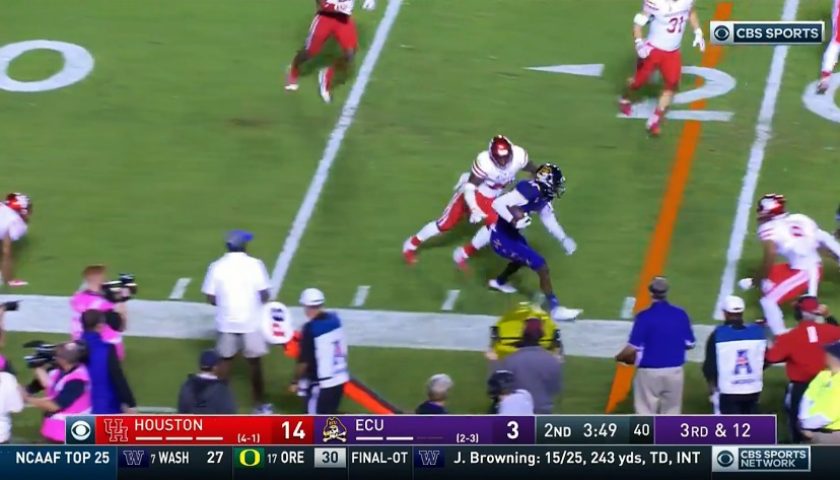 The ball is short of the 18 yard line 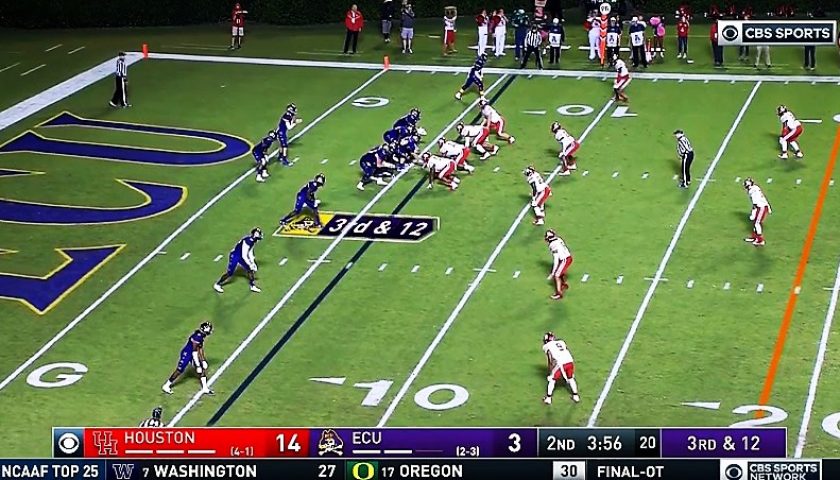 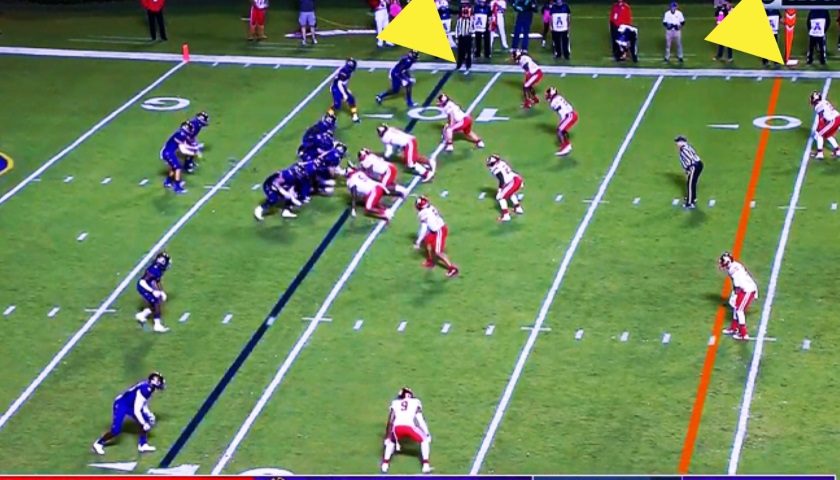 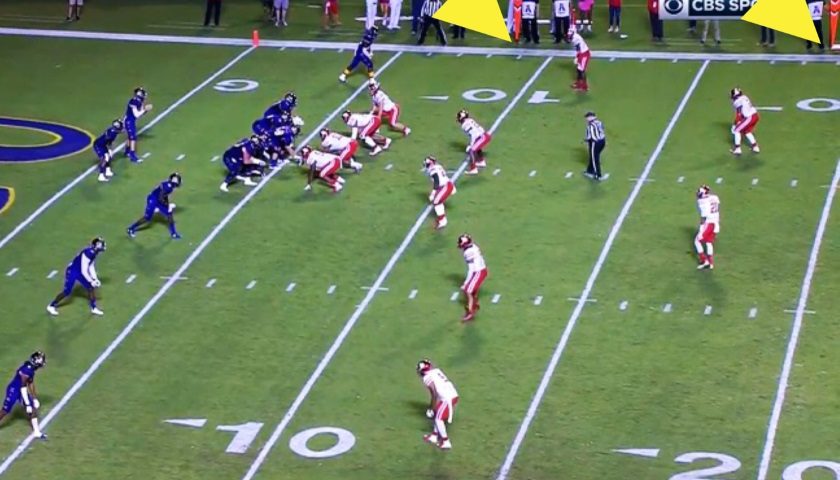 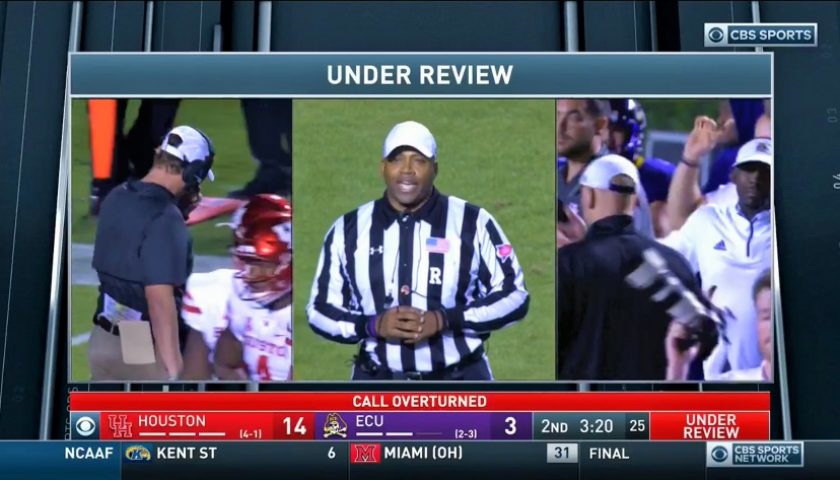 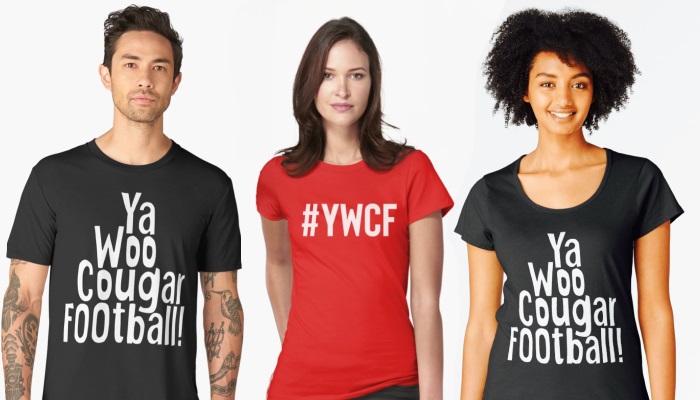 Ya Woo Cougar Football at GoCoogsStore.com

See all of the ECU game coverage at: