Home
By The Numbers
Beyond The Box Score – Texas Tech

Tech’s 605 passing yards were the most by an FBS team this year.

Their 704 total yards were the 7th-most given up by a team this year. The other victims in that top 10 are: UConn, FCS, FCS, FCS, FCS, Oregon St, FCS, Incarnate Word, and Georgia State.

The team in that list that sounds like us – Oregon State – is 3-30 in their last 33 FBS games. In a nutshell, what happened Saturday isn’t supposed to happen to “good” teams.

So what happened? UH committed to playing a soft zone against Tech, rushing as few as 3 defenders at many key plays in the game. Bringing 3 men didn’t work. It made for 3 tired linemen – forced into double-teams all day – and 8 exhausted guys going back into zone and having to run up trying to make a play. Soft zone will always be picked apart by a team like Tech.

The Scheme: Ole Miss vs. Houston

Thanks to GoCoogs.com contributor and former UH athlete Brad Towns, here are the defensive formations Ole Miss used early in the game as they jumped out to a big lead.

Here’s OM base defense against Tech:

Compare that to what Houston threw out there all day:

And it’s not like the Rebs are built to play that sort of passing attack. No one in the SEC West throws like that.

I came across this quote regarding Mark D’Onofrio that I thought was appropriate:

I’d like D’Onofrio to dictate the terms to opposing offenses. Blitz more often and more creatively, put the DBs closer than 10 yards off the line of scrimmage. But the reality is this defense … is going to get burned, one way or another. This is oversimplifying things, but what D’Onofrio seems to be doing is playing a version of a Prevent/Bend But Don’t Break scheme, but for the entire game.

Pretty good summation of what we’ve all seen. Except … it was written 6 years ago. On a Miami fansite just like this. 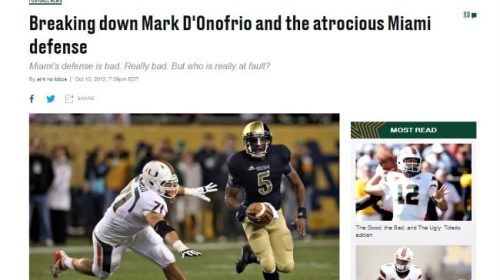 Mark D’Onofrio and the atrocious Miami defense
I’ve written before about the D’Onofrio “bend, bend, and bend a little more but never fully break” defense but Saturday, it finally broke.

That article has a comparison of D’Onofrio’s first year at Miami and his 2nd: 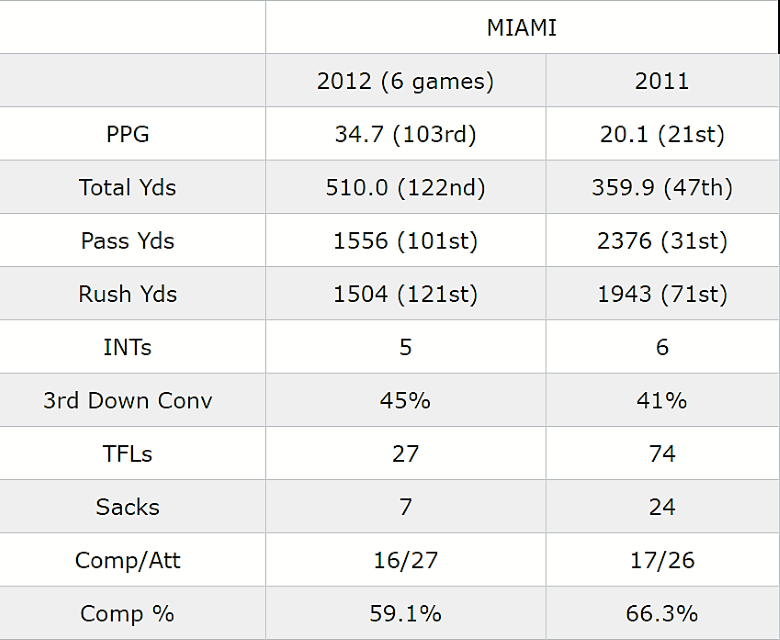 The drop-off is significant from his first season to his 2nd in Coral Gables. Sadly, it seems the same thing is happening at Houston under his leadership: 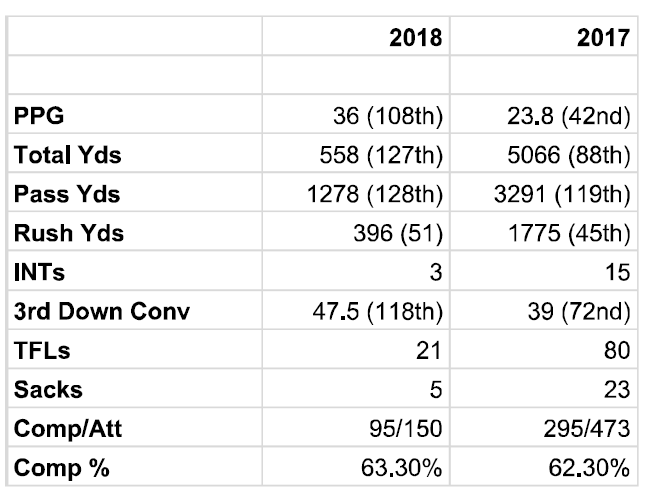 D’Onofrio’s contract runs through the 2019 season.

Some will say that the stats are skewed because it’s Tech. But Rice was 24 of 41 for 292 yards against UH. Arizona was 28 of 50 for 381 yards. All 3 teams UH has played have put up at least 430 yards and each was effective throwing the ball on the Coogs.

The D’Onofrio scheme is built on the premise that defenders in a zone will make the tackles right in front of them. But that’s not what we’re seeing in 2018.

Last week, I wrote about how we were missing way too many tackles. Yesterday, the Cougars missed 7 tackles on Tech’s 5 plays of 20+ yards in the first half. 7 missed tackles on just 5 plays of a 100-play day.

I also wrote about giving up too many first downs. UH gave up 36 first downs to Tech and have now given up 90 in three games. UH ranks 126th in the country in first down defense. We cannot get off the field.

And that leads into a time of possession problem. I find TOP to be a pretty worthless stat but it can be valid in this instance: when you are at the bottom in total defense (yards), first-down defense and third-down conversion percentage, you’re going to be bad in TOP. Which leads to tired defenders. Which leads to even more sloppy tackling. Which leads to even worse TOP. At least for UH in 2018, the Briles offense isn’t to blame for for being 127th in TOP.

How about some semi-good news on defense (there’s not much): Houston held Tech to their lowest rush total and per-carry averages of the year. Whoopee! UH allowed just 99 rush yards on 41 carries (2.4 ypc).

UH is 51st nationally in rush defense – by far the best statistical category for the defense.

Payton Turner had rarity for a DL: he got his hands on the ball on back-to-back plays. Turner deflected a 3rd down pass in the first quarter then partially deflected the ensuing punt.

The personal foul on Deontay Anderson might have changed the complexion of the game. Might. On 3rd and 7 from the 11 yard line, it appeared UH tackled the Tech receiver (RB Ta’Zhawn Henry) short of the line. Kliff Kingsbury would have been forced to make a decision on going for it or kicking a FG.

But Henry said something while getting up and Anderson shoved him to give Tech new life and a first down. I don’t mind penalties of aggression on the field but stupidity like that is inexcusable. It really cost UH.

Instead of potentially stopping Tech and getting the ball or holding them to a FG, Tech scored and tied the game at 28.

The Tech receiver Antoine Wesley burned UH for 13 catches and 261 yards and 3 scores. Before yesterday, he had 20 catches for 289 yards in his career. Wesley only had 2 offers coming out of high school: 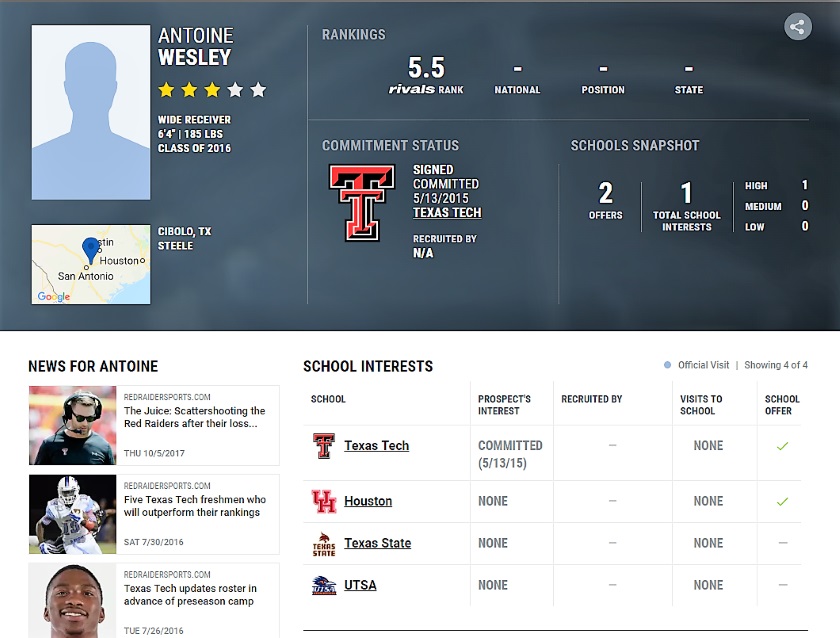 He was so lightly recruited that Rivals didn’t bother to get a head shot.
#GoCoogs