The Coogs are favored by 11.5 on the road at Navy tomororw. That’s a big number but the experts don’t think very much of this Navy team. But as we all know, the Middies are always ready to give UH their best game.

Here are our keys to victory against the Naval Academy. (New: Click the footnotes to get bonus info)

Navy is 2-4 with only 1 FBS win in 2018. They haven’t been a good football team this year – scoring just 23 ppg against FBS teams. And with 3 undefeated teams coming up on the road,17-0 Notre Dame, 6-0 Cincinnati, 6-0 UCFthe Middies could see the UH game as their best chance to score an upset in the next month. Their players and coaches will try any and every thing to get a win Saturday.

This week, Coach Ken Niumatalolo has hinted that he could go back to 2017 starter Zach Abey at QB. We wrote yesterday that Abey was put on the shelf after spring practice, demoted to WR2Abey has 0 catches this season.– the least-utilized skill position in the triple-option. If a ‘follow the script’ coach like Niumatalolo is willing to throw out his plan mid-season, he’s willing to do anything to get this win. 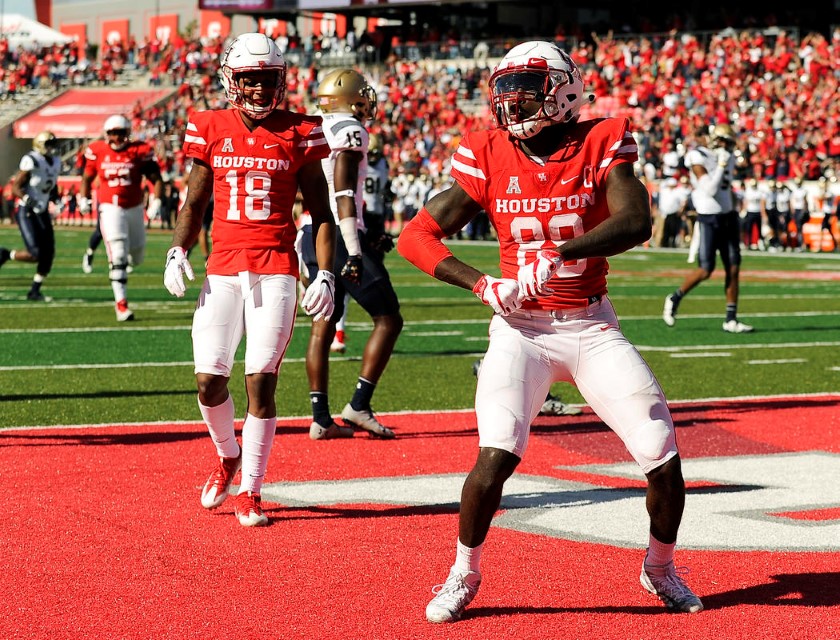 Steven Dunbar scores on a 61 yard pass vs Navy

Navy is going to squeeze the play clock to 5 seconds or less on each play. Their goal is to limit UH to 9 or 10 possessions.3The Coogs average 16 possessions per game in 2018.Navy doesn’t have the athletes to compete if UH can get 15-16 possessions.

In 3 seasons against Navy, the Cougars have averaged exactly 25 minutes in time of possession.

For the most part, UH has been effective in their chances against Navy. The Coogs have scored 19 times in those 33 possessions (58%) – by far their best against any opponent over the last 3 seasons.515 touchdowns, 4 FGsIn 2015, UH scored on 8 of 9 possessions in one of the most efficient offensive performances you’ll ever see. Since then, the Cougars has turned it over 6 times in 24 possessions.63 fumbles, 2 INTs, and a safety.

A secondary goal of dominating the play clock is to frustrate the opponent’s offense. Navy is pretty good at getting opposing QBs to panic. D’Eriq King must stay composed and let the offense come to him while taking advantage of his opportunities. Navy has shut down the Cougar running game the last two years 765 carries for just 228 yards (3.5/carry)forcing our QBs to beat them.

Patience is vital for Kendal Briles, too. Kendal has to avoid the temptation to just throw it deep all game. The underneath game will be there against Navy’s inferior athletes. And that, in turn, will open up lanes for the rushing attack.

By The Numbers: UH Through 6 Games