A Look At The AAC West Race

Houston stands alone at the top of the AAC West. Every other team has lost at least one game. 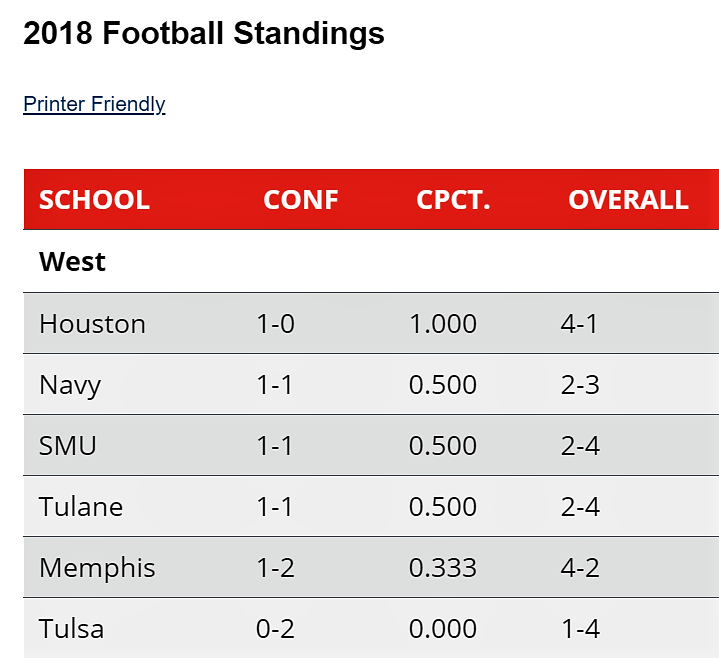 This week, all four games are cross-divisional. Tulsa hosts USF, Temple goes to Navy, UCF heads to Memphis, and the Coogs are at ECU. Each of the other 3 West teams will likely be underdogs – meaning, it’s quite possible we all wake up Sunday and the Coogs are 2-0, Navy has two conference losses and Memphis has three.

That is not a scenario I saw coming. Of course if UH doesn’t take care of business, they’re right in the muck with everyone else.

UH has the best overall record in the division at 4-1.

Just because the UH offense goes fast doesn’t mean that the defense has to be on the field for 35+ minutes. There’s a common misconception that fast-scoring offenses = defenses always on the field. It’s false.

The Cougar defense is always on the field because we’re pretty bad on first and third down. If our defense was getting a ton of 3 and outs, there wouldn’t be much problem. UH is second to last in the country in 3rd down conversions given up per game (8.2).

The bend, bend, bend but don’t break defense keeps us on the field for so long. That’s why you have a tired defense. Not because of the offense’s quick-strike capabilities.

Cougars Are Among The National Statistical Leaders

After Saturday’s action, here’s where D’Eriq King stands among the nation’s leaders: 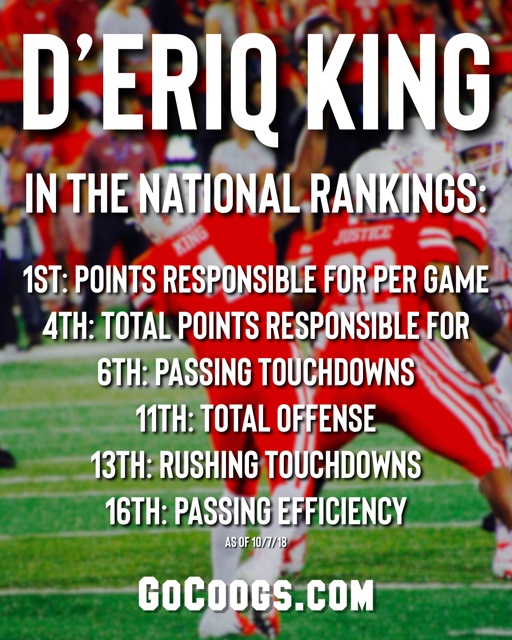 Marquez Stevenson is 10th in receiving TDs and King and Stevenson are tied for 22nd in total touchdowns (7). Emeke Egbule is 5th in the nation in fumbles recovered (2), Isaiah Chambers is 23rd in sacks (4.5) and Garrett Davis is 25th in INTs with two.

End Of The Half Vs. Tulsa

Letting Tulsa run out the clock at the end of the half still irks me. Anenih’s sack of Boomer at the 31 yard line happened with 30 seconds left. It was 4th down and a mile. Why not use one of your two timeouts to force them to punt? 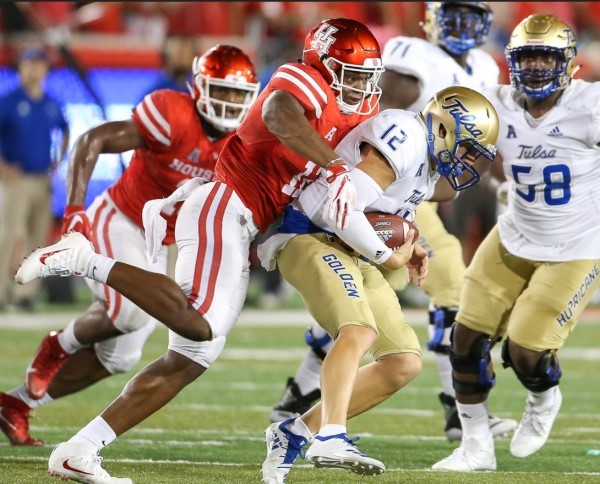 Then, go after the kicker – hard. Worst case scenario: you get a roughing call and Tulsa is still on their side of the field with about 22 seconds left.

Best case? a blocked kick and you’re in the red zone with a timeout in your pocket. Or you field a punt and take a shot or two down the field. The Coogs had scored on the previous two possessions and had some offensive momentum. Instead, we waste it and come out flat in the 3rd quarter.

Major’s default setting is conservative. A coach with the explosiveness of King and this offense should always default to giving them a chance. It could have gotten the crowd into the game, too.

The Cougars finished the Tulsa game with their least number of 1st downs all year…UH went almost 20 game minutes without a score of any kind (19:46) from the late 2nd to early 4th quarters…The Coogs went over 26 minutes from mid-2nd to early 4th without a TD – both D’Eriq King runs…Then UH scores 3 times in 91 seconds with a field goal, the beautiful throw to Brooker and the Stevenson TD. Go figure…My favorite part of having Kendal Briles here is the kill shot. Right after a turnover, he’s not afraid to go down the field. Or design a play that has a high likelihood of getting in the end zone – like the out pass to Brooker for the TD against Tulsa…The current senior class has 33 wins and is closing-in on the school record of 38 (2016).

Beyond The Box Score: Tulsa’s Panic & The Cougar Comeback