Home
By The Numbers
Beyond The Box Score: The 1st 4 Games & The Next 8

There isn’t much that can be gleaned from the Texas Southern game. Going deep into the box score or film will show things we haven’t seen against FBS programs.

It’s encouraging to see pressure brought against a QB and actual punt returns and a back-up QB having success in the offense. But against bottom-of-the-FCS competition (238 in Sagarin), you can’t put much stock into it.

Notable From The First 4 Games

A few things to consider from the first 1/3 of the season:

As we discussed yesterday, the 209 points UH has scored is a big deal. That total looks ridiculous when compared to the 101 the Coogs scored in the first 4 games last year.

In reality, 209 is the second-highest first-four-game scoring mark in our history.

Notice that, in this very specific stat, 5 of our top six scoring starts have occurred in the last 9 years. The Tony Levine years are glaringly missing from the list (as is Major’s first year).

Previously, I never considered the 2010 start as being so productive (Coogs scored 122 in two games before Keenum tore his ACL). 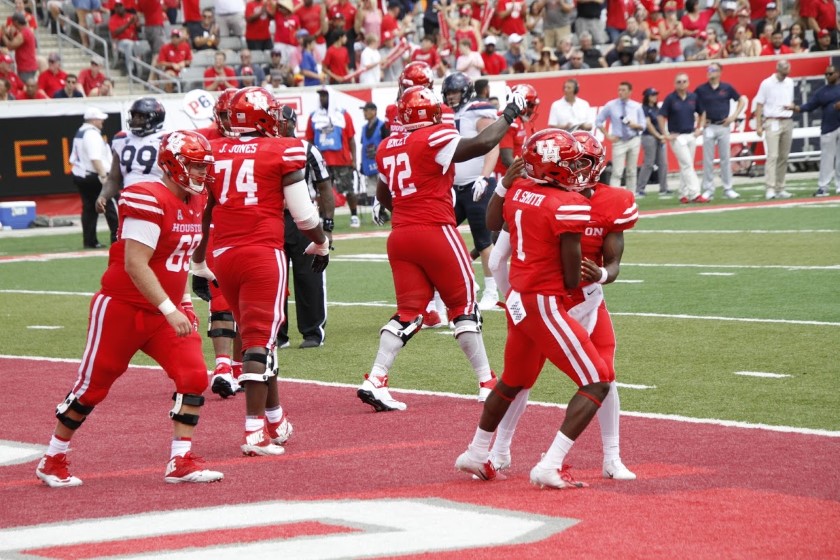 The next 7 weeks, leading to the showdown in Memphis on Black Friday, should present few road blocks. The Coogs are in prime position to go on a winning streak if they can get a home win over USF.

A look at our remaining opponents:

For reference, UH is 45th in Sagarin, 49 in FPI with 9.1 predicted wins, 52.3 ppg (4th) and a remaining schedule of 87. Cincinnati is the only AAC program with a worse remaining SOS.

USF and Memphis are toss-up games that could go either way. UH should be heavily favored against the other 6 teams. Those 6 teams have a combined 8-15 record (4 FCS wins, 4 FBS & only 2 OOC).

Only two teams on the remaining schedule are in the top 60 in scoring. Three are ranked 100th or worse in scoring. This fact alone should help the UH defensive numbers quite a bit.