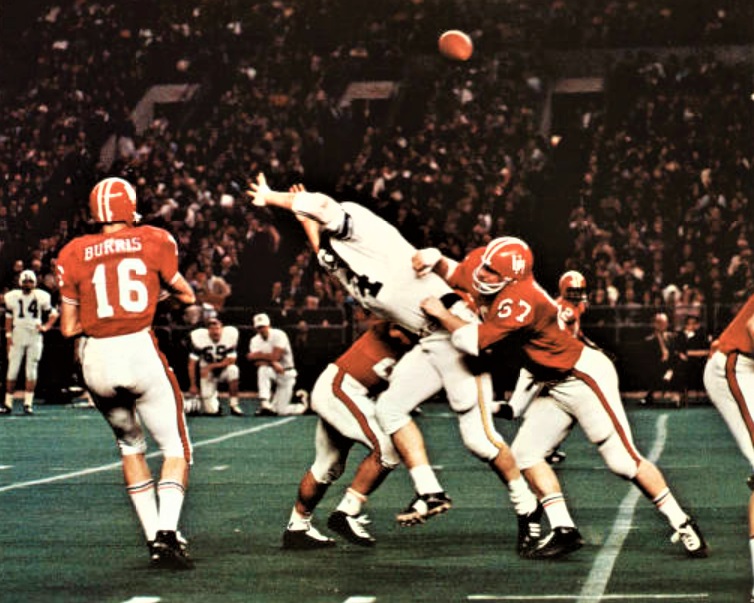 Bo Burris is a UH legend and was the first-ever Veer quarterback. We look back at his Cougar career on his 75th birthday:

On October 16, 1944, James England Burris Jr. was born in Luling. The Burris family settled in the Lake Jackson area and Bo, as he’d come to be known, played just about every sport for Brazosport including safety and QB on the football team. Burris was not recruited heavily out of high school and was expecting to attend Sam Houston.

But fate intervened: Bo was noticed by Bill Yeoman at the regional track meet held at Jeppesen Stadium. Burris had just qualified for the state meet in the high jump and Yeoman told him he had a scholarship at UH if he wanted it. Burris jumped at the chance.

He started at the bottom of the depth chart – #7 on the QB list – and eventually moved to safety where he would start in his sophomore season in 1964. Bo also served as the third-string QB and got his first QB start at Mississippi State (18-13 loss). After an off-week, Burris directed two scoring drives vs. Florida State to salvage a tie. But Bo couldn’t get UH a win and the 1964 season ended with a 2-8 record.

In 1965, UH debuted the new Domed stadium but things did not go as planned for UH or QB Bo Burris. The Coogs were shut out in the first two games (14-0 by Tulsa, 36-0 by Mississippi State). The next week, UH didn’t score until the 4th quarter against Cincinnati but it was Dick Woodall that threw the TD pass. Not Bo. 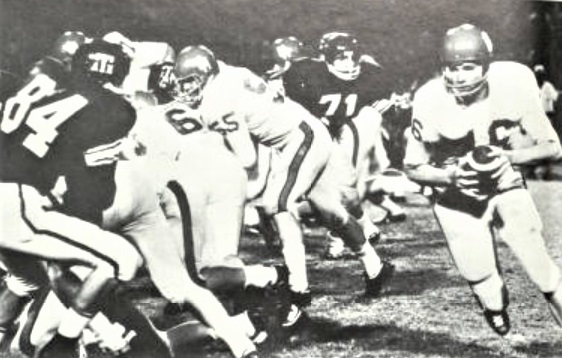 Bo running the end sweep vs. the Aggies

Bo and the offensive line struggled against A&M and, after the offense “fumbled two or three times” in the first drive against Miami, Bo Burris was benched. He calls the Miami game the low point in his UH career. Fans had been hanging effigies on the UH campus of Yeoman with Burris right next to him. The practice was even worse after the Miami game.

With the gloom of the season over their heads, the team traveled to Knoxville for a game with the Vols. Burris had spent the week practicing at safety figuring he wouldn’t get another chance at QB. But according to author Robert Jacobus in Houston Cougars In The 1960’s, that Friday night Yeoman brought the team together for a chat that changed Cougar history.

“I’m not going to give in to this,” Yeoman said about the pressure. “Tomorrow we’re going to run the Veer and Bo Burris is my quarterback.”

Bo Burris, a week past his 21st birthday, would be the first Veer QB.

The Coogs played well but lost at Tennessee. But Burris and his teammates could feel a shift coming. UH blew threw Chattanooga the next week as Burris set the school passing record – 223 yards. The 40-7 win set up the annual game with Ole Miss.

But against the Rebs in ’65, Burris and running back Warren McVea had a day. Burris connected with McVea on an 80-yard TD pass. The Astrodome went wild. The Houstonian yearbook described the play:

“Burris lofted a floating spiral down the sidelines; Warren McVea blazed past a defender to scoop in the ball and fled some 50 yards to the end zone in a blur.” 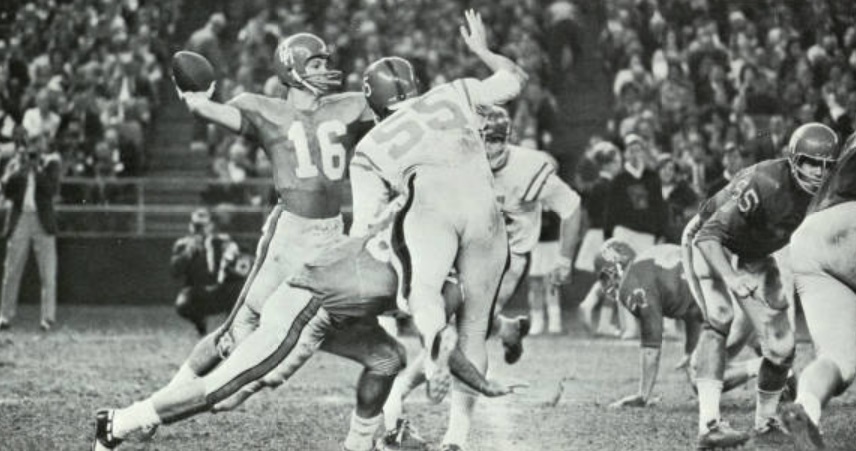 Bo Burris vs Ole Miss on Homecoming, 1965 / The Houstonian

A bit later, Burris hit McVea again, this time on an 84-yard score. Almost miraculously, the Cougars led Ole Miss 17-0. Bo was “a magician with the football” as McVea said later.

After the second TD, McVea and Burris huddled on the sidelines. The Houstonian said they beamed at each other “for a moment in mutual vindication.” Both had been scapegoated for the bad season. That night, Burris set the school passing record again with 284 yards.

Warren McVea made his own history in the game: he became the first-ever African American to play against Ole Miss.

It was UH’s first-ever win over Ole Miss. But more importantly, it vindicated Yeoman and Burris and the Veer was here to stay. Yeoman didn’t care what the fans thought of him – he was more concerned about his quarterback.

“When (the fans) chew on Burris, they’re chewing on the one chance we have to be a good football team,” Coach said.

Burris was “a magician with the football” – Warren McVea

The Cougars beat #10 Kentucky 38-21 a week later. Burris threw 4 TD passes, a school record, telling Jerry Wizig in Eat ‘Em Up, Cougars that Kentucky was “the best game I ever had.” UH tied Florida State in the season finale and finished the year 4-5-1. After a 1-5 start, UH went 3-0-1 in the final month.

In the 1966 opener, the team had another hump to get over: winning a road game. The Cougars had gone three full seasons without a road win but the opener in Tallahassee was their chance. UH beat Florida State, 21-13, on the back of two Burris TD passes. On the first play from scrimmage, trailing 7-0, Bo connected with Warren McVea for an 80-yard TD. After an interception by the UH defense, Burris hit Ken Hebert for a 26-yard touchdown to take a 14-7 lead into the half. A punt return for a TD and a goal-line stand preserved the first road win since November 1962.

Six days later against Wazzu, Burris hit McVea for a 99-yard touchdown pass. It the longest pass in the NCAA since 1947. That was a 21-7 win before the Cougars whipped Oklahoma State the next week, 35-9.

Spurrier is, of course, Steve Spurrier, who went on to win the Heisman in 1966. With the win, UH was now 4-0 and ranked #11 by the UPI, the highest ranking in school history.

UH lost at Ole Miss as the Rebs had revenge on their minds. The Coogs then blew threw Tampa and Tulsa in blowouts. Houston went to Lexington to play the Kentucky Wildcats on their Homecoming.

“Kentucky stopped us on our first series,” Burris remembers. “And when I came off the field, Coach Yeoman had a funny look on his face. I told him, ‘Don’t worry, we’re going to score.'” And did they!

On a draw play to end the half, Dick Post broke several tackles and lunged into the end zone after time expired. The score was 36-6. When the game ended, UH had won 56-18 and were 7-1. The team would lose to Memphis by a point and then beat Utah to finish the year 8-2.

Beginning with Burris’ senior class, UH had winning seasons in 15 of the next 16 years. In 1965, Burris set a single-season school record with 22 TD passes, a number that would not be broken until Andre Ware did it in 1989. The Cougars finished #18 in the country and #1 in total offense and #2 in scoring average.

With his football career finished, Burris went out for the 1967 UH Baseball team. In his only season with the team, UH advanced to the National Championship game against Arizona State at the 1967 NCAA College World Series.

Bo was part of the 9th inning rally against Texas that sent the Cougars to the College World Series. Down 3-0 with 2 outs in the 9th in Austin, Tom Paciorek beat out an infield hit. Next up, Bo Burris singled – his third hit of the game.

Ronnie Baker sent both home with a double, Art Toombs walked then Chico Silman hit a ball 400 feet to left-center for a triple and to drive in (what would be) the game-winning run. UH was heading to the CWS.

That spring, as the UH baseball season was beginning, Bo became the second-ever pick of the New Orleans Saints franchise. Bo was the first pick in the 2nd round just one pick after the Saints chose their first-ever player. He played three seasons in New Orleans at safety before retiring.

Bo Burris on the run