Home
Football
Stick It In Your Pipe And Smoke It! 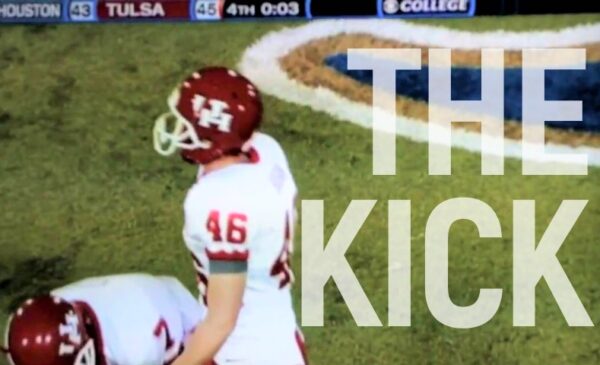 UH went into Homecoming week struggling with their kickers. Jordan Mannisto had hit 3 big kicks against Texas Tech but had also missed on two. He missed another vs. UTEP the following week and had one blocked vs. Mississippi State.

Ben Bell replaced him in the 2nd half against the Bulldogs but missed a 25-yarder the next week in New Orleans. He also missed two PATs. Special teams coach Tony Levine didn’t have an answer at kicker.

With the position wide open, walk-on freshman Matt Hogan won the kicking job heading into Homecoming vs. SMU. That day, Hogan went out and made all 6 kicks – 5 PATs and a short field goal. It seemed Houston might have finally found their kicker.

“Matt Hogan did a great job and he was strong with his extra points and field goal.” – Kevin Sumlin after SMU

A week later, in a back and forth Halloween day-game with Southern Miss, Hogan was flawless again. He connected on 6 PATs and two field goals (34, 23 yards) in the 50-43 win.

But Hogan’s two perfect games were at Robertson Stadium. He hadn’t kicked on the road. Would the kicking game crumble at Tulsa on November 7th?

The nationally-ranked Cougars (13 in the AP, 15 in the BCS) strode into Chapman Stadium feeling pretty good about their 7-1 record. When Hogan walked onto Skelly Field for warm-ups, he must have noticed the typical Tulsa wind, coming across the Arkansas River from the south.

Tulsa won the opening toss and deferred. Houston decided to defend the north goal, giving Tulsa the wind to start. But it also meant UH would have it when the 4th quarter comes.

The teams traded punches until Hogan booted a 32-yarder early in the 2nd quarter for a 17-14 lead. On the next UH possession, James Cleveland caught a 32 yard pass from Case Keenum for a score and Hogan made the PAT. Tulsa scored just before the half to make it 24-21. 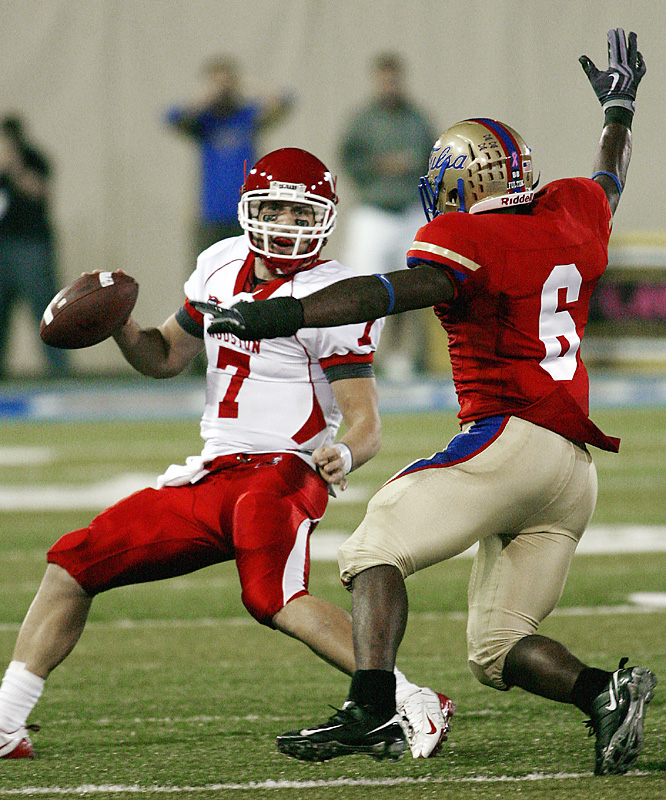 “Case Keenum is a really special, classy guy. I really wish him nothing but the best. It’s really great to see guys that are great players and also first class gentlemen. I really am impressed with him.” – Todd Graham

Graham’s team came back with another TD early in the 3rd to make it 28-24 Hurricane. Hogan hit another field goal midway through the quarter to cut the lead to one. After 52 points had been scored, that’s when the dogfight began.

The Hurricane responded to the field goal with one of their own, followed by a touchdown to take an 11-point lead with just 17 minutes to play. But Tyron Carrier returned the ensuing kickoff 98 yards for a score. With the Hogan PAT, the Coogs were back within four.

Early in the 4th, UH put together a nine-play drive but Bryce Beall was stuffed on 4th-and-1 from the one. The Cougar defense held on the next possession and produced a three-and-out. Keenum once again drove the Coogs back inside the 10 but on 4th and 1, Sumlin decided to take the points from his new sure-fire kicker.

Hogan nailed the 26-yard field goal to get the Coogs back within a point. In just 3 weeks, he had ended the Cougar kicking woes. After the FG, the walk-on Hogan was now 20 for 20 in his PAT and FG attempts.

“At the beginning of the season I wasn’t even kicking. Then we held an open tryout and I got the job then. I was just waiting for a chance, and now I’m enjoying every minute of it.” – Matt Hogan

On the following drive, Tulsa scored on a fullback dive to go back up by 8 points. Fearing another Carrier return, Tulsa elected to squib kick it and Devin Mays returned it to the 39. It was 45-37 with 3:23 to play.

The Coogs put together a methodical 13-play drive. Keenum was shaky early in the drive – completing just 1 of his first 5 throws. But he came alive, hitting Cleveland for 16 then Carrier for another 9. A short pass to Edwards and a 13-yard run from Beall got the Coogs to first and goal from the 2.

Keenum throwing over a defender

After two Bell rushes picked up just a yard, Case rolled out to his right and hit a crossing James Cleveland at the goal line. Touchdown! 45-43 Tulsa.

With 21 seconds left, everything was riding on the 2-point play.

On the conversion attempt, RB Charles Sims was sent in motion to the right side leaving the weakside linebacker, Tanner Antle, a free lane to blitz. Keenum was shuffling to his right and never felt the pressure from Antle. Sack.

Now, UH would need an onside kick, and a quick drive, and a Hail Mary. The Coogs likely wouldn’t get close enough for the freshman kicker.

UH lined up in what UH radio play-by-play announcer Tom Franklin called the “criss cross.” Two kickers, Turner and Hogan, both set up to kick it to confuse Tulsa. Turner booted it to the right side and got a great first bounce. The ball hit a member of the Tulsa “hands team.”

And he dropped it.

The ball lay on the turf for what felt like an hour. Tim Monroe, lined up at the most inside spot on the right side of Turner, ran to where the ball was kicked. Turner was standing on the 40 when he saw the ball squirt behind him. He turns around, still on his feet, and picks it up in the scrum. He tries to advance it but is tackled. Somehow, someway, the Cougars are still alive.

With the ball and 20 seconds left, Keenum went to work. He missed Chaz Rodriguez on first down before hitting Cleveland on a sideline pass at Tulsa’s 47. 10 seconds left. Franklin broke down the situation:

Next, Keenum hits a crossing Tyron Carrier for 13 more yards to the 34. Carrier gets out of bounds with 3 seconds to play. There’s only time for a field goal and it will be a 51-yard try.

Remember, Matt Hogan is perfect as the starter. He’s 20 for 20. But his longest kick to this point is 34 yards. And he’s gonna hit from 51? On the road? In this kind of pressure? A walk-on freshman? With the BCS and national rankings and the C-USA West title all on the table?

Kevin Sumlin and Tony Levine are good with this?

If Hogan makes it, it would be his 21st-straight. More importantly, the kick would make him immortal.

“Pregame, we test our distance and with that wind I was good from about 60 yards.” – Matt Hogan

Without delay, Matt Hogan jogs onto the field. He looks cool and confident. The Coogs are heading north towards the Case Athletic Complex. That southern wind is not as strong as it was earlier but it’s behind Hogan thanks to the decision at the coin toss. Keenum kneels, ready to put down the hold. Hogan goes through his pre-kick routine…

…but how about we let Tom Franklin take it from here:

Victory! 46-45. The Cougars scored twice in just 21 seconds to complete an amazing comeback. It was the first-ever walk-off win in school history.

Matt Hogan got the rare football dogpile. Then, he was carried off on the shoulders of his teammates. In three weeks, Hogan had gone from a total unknown to legend.

“I knew it had the distance. Everyone else knew it was good before me; everyone else was already celebrating. As soon as I saw the refs raise their hands, I knew it was time to celebrate with them.” – Matt Hogan

On that day, thanks to Tom Franklin, the phrase “stick it in your pipe and smoke it” entered the Cougar lexicon. Tom Franklin explained on Twitter why he was so worked up about Graham’s shenanigans:

“Two Tulsa players kept going down with “injuries” that would make any European soccer player proud. The same 2 players rotated in & out every two plays in the 4th quarter to rest a tired Tulsa defense.”

Case Keenum threw for 522 yards in the game. But no one remembers that. He also threw 3 touchdowns but no one remembers that, either. James Cleveland caught all 3 of Keenum’s TDs and no one remembers (or his 167 yards receiving). Patrick Edwards had 176 yards. Tulsa QB GJ Kinne had the 1st 300-yard passing and 100-yard rushing game in school history. The teams combined for 6 turnovers. UH ran 100 plays. Hogan’s 4 field goals were the most by a UH kicker since 1989.

And no one remembers any of it.

Instead, people remember Tom Franklin’s call. They remember Case Keenum’s heroics. But thanks to the right leg of Matt Hogan, “The Kick” will forever live on in our memories forever.

GoCoogs “Ugh, This Season” Sale: Save 40% On A Membership

Where else can you go for historic content about the Houston Cougars? GoCoogs.com takes pride in writing about UH history – the great teams, players, and coaches. Help support our mission of keeping Cougar history alive – become a GoCoogs member today.